Rotating Snowballs and Nine-Patches Quilt Along

In January a group of us started a quilt along making 9-patches and snowballs. You can see the list of participants on the sidebar.  If you've been following along each month and making six blocks per month, by now you'll have 30 blocks with which to play!

I have 32, and will need to make four more by the end of this month.  Here's a picture of what I have so far (please keep in mind that I have not trimmed any of the blocks yet and this is not a final design). 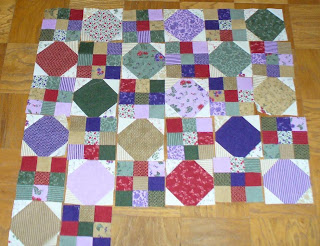 Nine-Patch Fever must be going around. Karen Montgomery of The Quilt Company is hosting a 9-Patch A Day Challenge that started on June 1. That means there's plenty of time for you to catch up.  Go to her blog at Karen Says Sew to learn more.  She also has created a group on Facebook for those of us participating.  It's a great project for using up scraps. I'm using 2.5" squares.

I decided to do a red, white, blue and tan version from my scraps.  I don't care about the motif or theme of the fabric, or whether there's a few other colors mixed in or even the value. My only goal is to use scraps and have them "read" Red, White, Blue or Tan from a distance. 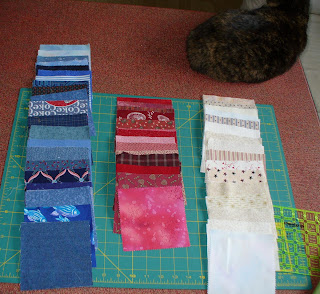 These are just a few of the scraps that I'm starting with. There's even a piece of denim or two in the blue stack.  I actually cut about 200 squares total on Memorial Day.  Notice me in the corner of the table taking a much-needed break. Momcat will cut for hours, but I need a catnap every 5 minutes or so.

I sorted my cut pieces by color (putting the tans and the whites together), placing them in drawer organizers so that they'll be handy next to my sewing machine.  Any time I'm sewing anything, this can be my leader/ender project.  I picked up the tip about the drawer organizers from Judy Martin's Log Cabin Quilt Book.

Karen's goal is for us to make just a block a day, understanding that we might really get going and make several at once. So far I've made three, one ugly on purpose to show you (really!)

And here's the ugly one. If you try to get too matchy (is that a word?) on these, they end up looking dumb. The scrappier the better. This one will be unsewn and the pieces all put back into the pile for picking. 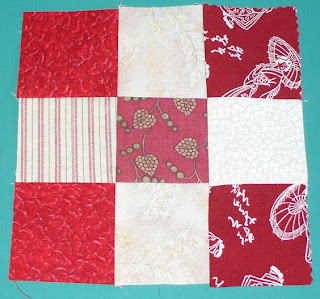 A little over a month ago Trouble and Logan went to live with CatDaddy. Logan has adjusted really well, but Trouble never did. Momcat and CatDaddy decided it was best for her to come back to live with us. Usually when one of us has been gone, it takes everybody else awhile to reaccept them.

In this case, as soon as Trouble walked out of the cat carrier Butch and Sundance came to greet her. The three of them touched noses and apparently are going to live happily ever after together on the kitty condo. I'm going to let them stay in the crow's nest for now.  They all know that it's MY throne! 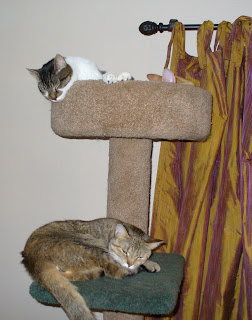 When Butch and Sundance came to live with us as babies, Trouble immediately adopted them even though she's never had kittens of her own. I think she was grieving for "her" babies and that's why she couldn't get used to her new environment. That's Trouble (with her head hanging down) and Butch up in the crow's nest, with Sunny on the shelf just beneath them.

I'm glad she's home. She's been my best student as far as quilt quality control. She's especially good about working her way into the midst of a quilt while Momcat does the binding.

....won first prize at the costume party! His friends wanted to know where he purchased such a cool costume. Leanne, Philip's sweet girlfriend, came in 2nd place with her Jean Grey from the X-Men disguise.


About to reclaim my throne for awhile,
Piwacket
Posted by Linda at 4:20 PM

Great update PiWacket - thank you! So glad Trouble had such a warm welcome home. Purrfect welcome!

I have my snowball top finished except for the need to add a border. I used scraps for the snowballs and nine patches, but struggling with what to use as a border. I think I'll have to post it and ask for advice soon, as I don't want it to go into my growing UFO pile for much longer!

That snowball quilt is going to be just gorgeous!! I love, love all the colors in it. Great job!

I need to get caught up. Truth be told I'm not as behind as I seem to think I am. I think I need 9 blocks?

Such nice work! Can't wait to see more. Thanks for entering our blog of the week contest!

Ya know, Pi, that's mighty generous of you to welcome Trouble back into the family like that. Letting her use the throne makes you look like a saint. Here's to sweet dreams... Red

love the snowball you do lovely work
Hugs Janice

All photos and text on this site belong to me. Please ask permission of the author. Feel free to LINK to this site from your blog, but do not cut and paste my property. That would be just downright rude, and quilters don't do that, right?

Linda
Cincinnati, OH, United States
I became single in my 50s and had to start over. It was pretty darn scary. Through the successes and failures, my faith and humor sustained me. Now I'm in my 60s, content, retired, and living a life of gratitude. I have two adult sons, one who lives across the country and the other just ten minutes away. I am blessed with a wonderful DIL and two amazing grandsons. I share my home with two lovable hounds and a bossy cat.

Add Snippets to your site